Our Ocean, One Future

Our Ocean, One Future Video Player

Showing the Our Ocean, One Future Leadership Summit Video

The U.S. Department of State, the Walsh School of Foreign Service, and the Sustainable Oceans Alliance—together with the support of the Global Futures Initiative and Georgetown's Science, Technology & International Affairs Program—co-hosted the “Our Ocean, One Future: Leadership Summit” as a parallel event to the "Our Ocean" conference. The private student conference engaged the next generation of political leaders, entrepreneurs, and scientists, along with civil society to identify solutions and commit to actions aimed at protecting our ocean so it can continue to sustain us all into the future.

As part of the conference, Georgetown hosted a high-level foreign government panel moderated by the university's Vice President for Global Engagement Tom Banchoff. The panel was followed by a moderated Q&A with Secretary of State John Kerry and actor Adrian Grenier. The sessions aimed to catalyze actions to protect our ocean from threats and to empower a new generation to lead the way toward a healthy and sustainable ocean.

Her Excellency Isabella Lovin is the deputy prime minister and minister for international development cooperation and climate of Sweden. Minister Lovin is a member of the Green Party and was elected to the European Parliament in 2009.

Her Excellency Susana Malcorra is the minister of foreign affairs and worship of Argentina. Minister Malcorra has served in a variety of leadership positions, including as the United Nations under-secretary-general for field support and as chief operating officer and deputy executive director of the World Food Programme.

Her Excellency Segolene Royal is the president of the COP 21 and minister for environment, energy and the sea of France. Minister Royal was elected to the French National Assembly in the late 1980s and has held a number of leadership positions since then, including minister of school education and minister of family and children.

Adrian Grenier is an actor and environmentalist. He is the co-founder of the Lonely Whale Foundation, an organization dedicated to inspire empathy and action for healthy oceans and marine life.

John F. Kerry is the secretary of state of the United States. A former senator from Massachusetts, Secretary Kerry previously chaired the Senate Committee on Foreign Relations. He is the co-author of This Moment on Earth, a book on the environment which he wrote with his wife, Teresa Heinz Kerry. 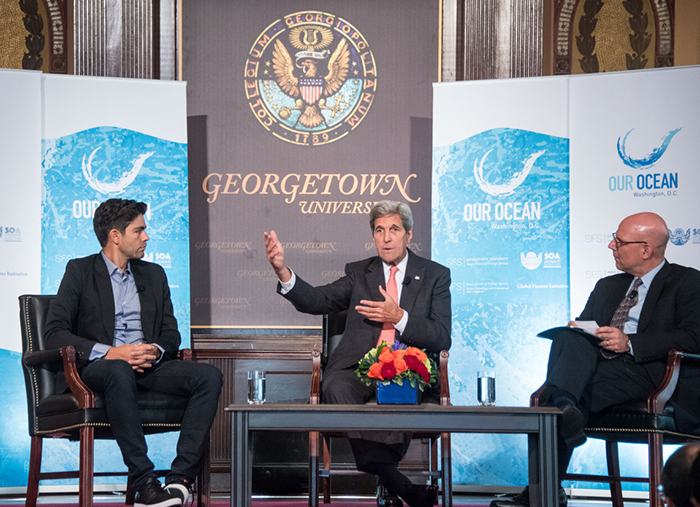 Our Ocean, One Future

RSVP to Our Ocean, One Future

Sorry, the time period to RSVP to this event has ended. Please send any questions to:
global@georgetown.edu